If you have ever needed to revert FrameMaker files to an older version, the following script does so automatically. It works on the active document but you could convert it to work on a book or a directory of files.

I chose not to change the file name. I end the script by closing the FM 10 version of the file without saving it. The FM9 version is already on disk.

After running the script, I opened the test file just to convince myself this really works. 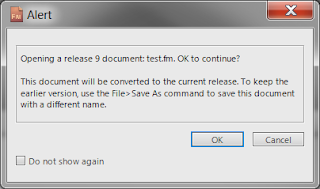 Debra Herman
I am no longer actively working with FrameMaker but continue to have an interest in customizing FrameMaker. You can reach me at debra(at)dtrain(dot)com.